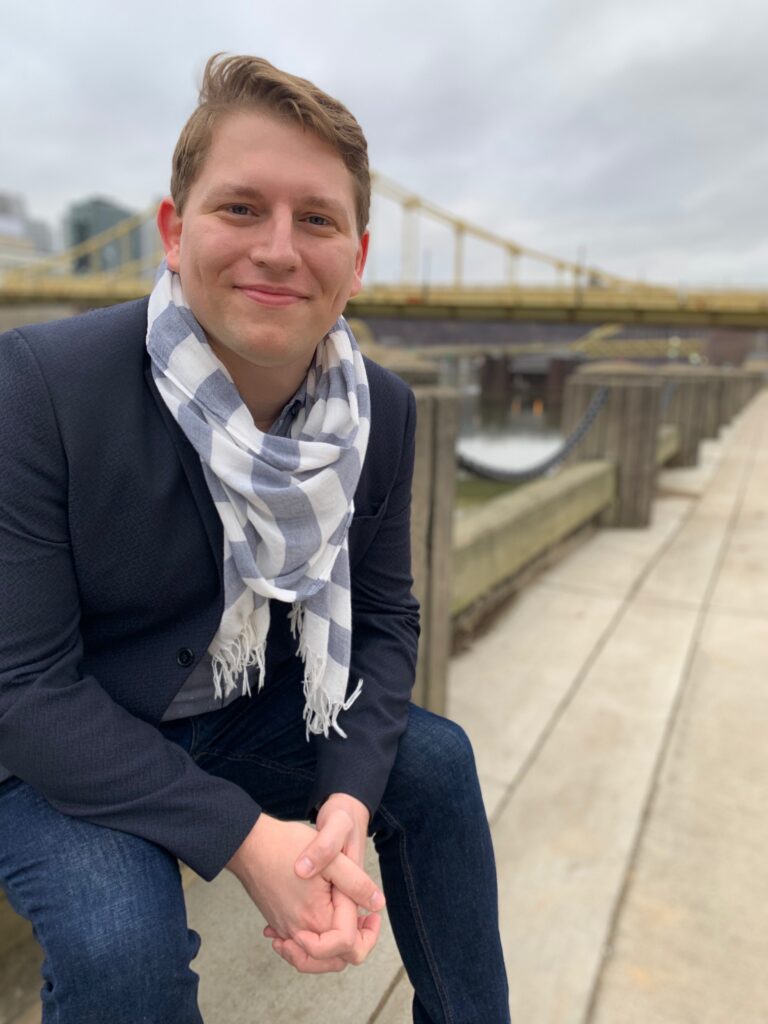 “I’m a director and arts educator native to Pittsburgh where I’m currently the Founding Artistic Director of a new company called Underscore Theater, which focuses on reimagining musicals and realizing new ones; a Resident Artist at Pittsburgh Musical Theater; the Chair of the Acting Department at Pittsburgh Musical Theater Conservatory; and the Assistant Artistic Director of Stagedoor Manor. I’ve directed over 75 productions across the country at theaters like Central Square Theater, The Brick, The John F. Kennedy Center for the Performing Arts, Alchemical Studios, Stagedoor Manor, The Huron Playhouse, Hippodrome Theatre, and more. I’m about to start my second semester with Quantum devising projects through in-school residencies at Pittsburgh Public Schools bringing 12 years of experience as a Teaching Artist to the awesome students I get to work with through our programming.”

Why Nick thinks being a teaching artist with Quantum is impactful:

“The outreach Quantum offers to area schools is completely unique as many of the plays they produce contain grounded, real world issues that many of these students are struggling with in their own lives. For example, with Chimerica last semester, that piece obviously deals with the themes of protest and freedom of speech. That’s where devised theater starts in its process, with something the artists are inspired by. Many students ran with this idea of protest to collaborate on designs and performance pieces inspired by protest in their lives, specifically the Black Lives Matter movement.”

Nick’s favorite experience while working with the students:

“It’s actually the final performance the students put on for all participating schools when we come together at the end of the semester. The raw emotion and investment that each school group has with their peers in the audience is something truly unique and special. No other art form achieves the collective experience that live theater does, and when the kids discover that kinetic energy with one another as total strangers from school-to-school, it’s a human connection many of them are experiencing for the first time.”

How Nick feels about Art Education in schools:

“Phylicia Rashad’s incredible quote comes to mind whenever I’m asked this question: ‘Before a child talks, they sing. Before they write, they draw. As soon as they stand, they dance. Art is fundamental to human expression.’ The main focus of Arts Education isn’t to craft professional artists (that’s simply a branch of it). It’s really about learning and growing to be a better person that embraces the full breadth and beauty of our shared humanity.”

What Nick wants students to takeaway:

“Theater doesn’t have the power to change society and culture like it used to. Film, television, and social media are the mediums that do that now. But the art of theater has something transformative that those other forms don’t. Theater’s reason for being is because we ‘sit together in the dark to know how to love each other in the light.’ That live collective experience of watching a compelling story unfold onstage is something that no other art form can come close to replicating.”

Nick’s final thoughts on being a teaching artist:

“I’ve taught kids from many diverse backgrounds and different levels of experience with theater over the years and the stress of being a young person trying to navigate life in the past five years can be overwhelming for them. We’re starting our second year of being in a mishandled pandemic, they’re exhausted by the limitations of virtual learning on Zoom, many of them are overwhelmed by large amounts of homework, each of them are trying to navigate who they are as a person in a world of turbulent social/political divide, they have the added pressures of being born in the era of social media so they know nothing else but the need of instant gratification of an online presence, and like many adults, they’re simply burnt out right now. Young people today are facing incredibly difficult hurdles and are unfortunately being forced to grow up more quickly. Being a small part of their lives has made me be more kind to myself and patient with the expectations I have of people. I simply wish these students would do the same.”