Memory Space: The Carnegie Free Library and ALL THE NAMES 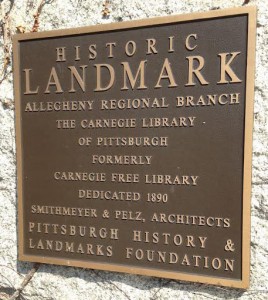 “The Central Registry,” an ominous recording explains as you walk into darkness, “is comprised of the card indexes and archives of the living…and the archives and card indexes of the dead.” You move through cavernous rooms—rooms which, for a hundred years, held the stacks and catalogs of the Carnegie Free Library of Allegheny—now refitted with the surreal scene design of All The Names’ Central Registry, where the protagonists of José Saramago’s Nobel Prize-winning novel come to life in Quantum Theatre’s Kafkaesque adaptation.

The space could not be more perfect. One of the country’s oldest library buildings, the Carnegie Free Library, which sits in the Allegheny Commons area of Pittsburgh’s North Side neighborhood, was once a bustling cultural center. Seeing its patronage diminish as Allegheny City’s population fell and resources were diverted to other branches, the library closed after lightning hit the clock tower in 2006, its once-hallowed halls stripped of books and shelving and the card indexes of a century of history. But, at least for the run of All The Names, the ghosts of the stacks are back, stocked with the Central Registry’s records of Births, Marriages, and Deaths: the primary data of everyone in Saramago’s unnamed country; stocked, essentially, with all the names. 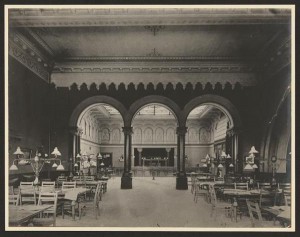 “Carnegie, when he had these things designed, he designed them for multiple uses,” says John Canning, vice president of the Allegheny City Society, a historical group dedicated to the legacy of North Side landmarks. “They often had music halls, lecture halls. They weren’t just libraries.”

Karla Boos, Quantum’s founder and artistic director, adds, “It’s a municipal building, once home to city records, the building itself a repository of information, in a way representative of the city’s people, their lives, behind the books, and in that way like the setting of the novel.” 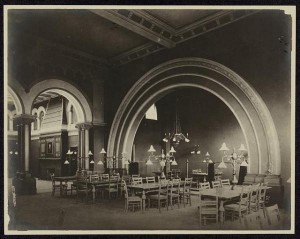 Boos has been co-adapting the production with Mattress Factory founder Barbara Luderowski and a host of “co-devisers,” artists and designers who’ve not so much transformed the library as restored it, at least a version of itself, a version that feels at once fantastically overwhelming—the labyrinthine world of the Central Registry—while throwing the absences in the space into stark relief: you become acutely aware that this beautiful place once housed real books.

Canning sees hope in that awareness. “Having a performance in this location will highlight the potential of this building. It will show what can be done with a space that’s now been vacant for a decade. And it’s a public space—it belongs to the city.”

Boos and her team seem to agree. They’ve incorporated the classic architecture of the building, utilizing the grand rooms, the articulate columns, the balconies, the hidden staircases. “We found it felt right,” Boos says. “[The library] offered several spaces so the audience could move and actually feel like [protagonist] Senhor José on his journey of discovery, and we could treat that journey in different ways, involving all the senses.”

Explore the Central Registry will all of your senses in Quantum Theatre’s world premiere of All The Names, devised by Karla Boos, Chris Evans, Cindy Limauro, Barbara Luderowski, Sarah Pickett, Megan Monaghan Rivas, Joe Seamans, and Narelle Sissons. The show opens April 10 and runs through May 2 at the Original Carnegie Free Library of Allegheny, adjacent to the New Hazlett Theater. Purchase TICKETS online or call 412-362-1713. More info here.

Brandon Getz is a writer and blogger living in Pittsburgh.  Read more at brandongetz.com