Inside the Temple of Comedy

Onstage: instead of an altar, a lascivious leather loveseat. Instead of a choir, a Casio. At the opposite end of the sanctuary, shelves of liquor bottles glow disco colors, and between bar and stage, in place of pews, are cabaret-style tables. Get comfortable. You’re about to worship at the altar of the Temple of Comedy, Quantum Theatre’s pop-up club for Aditi Brennan Kapil’sBrahman/i.

“What was exciting about creating a comedy club,” says Scenic Designer Britton Mauk, “was thinking about what kind of club [Brahman/i] would be performing in—a seedy place where you’re only paid in drinks? Or the kind of mid-level place with a warm-up, et cetera?”

Mauk decided it wasn’t that kind of mid-level place. It ain’t a club where dad comedians tell dad jokes and get polite chuckles from all the other dads. “It’s titled a comedy club, but it should have a vibe like bands playthere as well…Practically, also, I don’t think Brahman/i would be hired to do standup in any other sort of establishment!”

The Temple of Comedy is popping up inside the Bloomfield-Garfield Corporation’s Community Activity Center on N. Pacific, in what used to be a church. The building is still undeniably churchy in its architecture, especially with the stained-glass lancet windows still in place where the altar used to be. The windows provide the perfect backdrop to Brahman/i’s routine: colorful, vivid, with a shade of the spiritual. 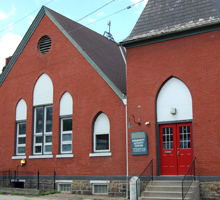 “We didn’t set out to be in a former church,” says Karla Boos, Quantum Theatre’s founder and artistic director. “But what could be better than a former church, a ‘transitioned’ place of spirituality.  And we started riffing: it’s the Temple of Comedy.  The ‘marquee’ outside is a church sign, with rotating jokes like the sermon announcements.”

Mauk adds: “Pittsburgh is kind of known for its reclamation of church spaces.” The designer points to Church Brew Works on Liberty Avenue, where beer-brewing kettles sit like silver idols on the desanctified altar.  All over the city, old churches are music venues, apartment buildings, tattoo parlors. And now in Garfield, at least for the run of Brahman/i, a comedy club.

“Our thought was that the pop-up comedy club we wanted to create would be in a neighborhood like Garfield, where there were artists doing their thing despite challenging economic circumstances,” says Boos. Recent construction issues brought tough times to that corridor of Penn Avenue, and still businesses remained open, and eager art-lovers braved the construction fences and broken pavement to attend Unblurred, Garfield’s “First Friday” art-gallery crawl.

“Penn Avenue has carved a niche for itself as a place where the grass-roots arts scene can flourish, and Quantum certainly fits that definition,” says Rick Swartz, executive director of the Bloomfield-Garfield Corporation, the organization that owns the venue. To find a home for the Temple of Comedy, Boos and her team at Quantum reached out to Swartz to explore spaces near Penn. Of the Activity Center now being overhauled by Britton Mauk, Swartz says, “Our Activity Center is certainly a modest place by comparison with the O’Reilly, and the fact that Quantum wasn’t put off by that fact is great.”

Far from being put off, the Quantum team has embraced the space. In addition to the riffs on its house-of-worship flair, Mauk is adding architectural details like moulding and spindles to accentuate the space. The designer is utilizing a vivid color palette drawn from East Indian inspiration. “There’s so much in East Indian culture that has these lush, vibrant colors, and Brahman/i is a very colorful character.”

But Mauk isn’t just creating a comedy club. There’s an invisible element at work in the design, an element you’ll feel as you enter. “No one should feel like an outsider in this space,” he says. “They should feel at home and entertained or intrigued by their surroundings. So much about the piece is just accepting someone as they are, how they feel in that moment,” and the club Mauk is building sets out to offer that same feeling of acceptance, where everyone, even someone like Brahman/i, can feel at home.

Flock to the Temple of Comedy to see Quantum Theatre’s production of Brahman/i at 113 N. Pacific Avenue, January 30 through February 22. Buy tickets online or call 412-362-1713.